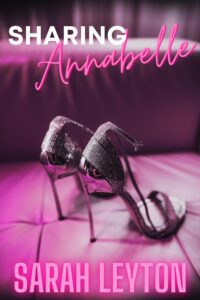 She was ready to enjoy the heck out of that strawberry and she focused her full attention on the delicacy.

Lifting the succulent treat to her lips, she took a small bite. The rich, smooth chocolate melted in her mouth and there was just a hit of the sweet fruit underneath. The taste was heady. Practically orgasmic.

The sensation running through her body was extraordinary. It was like the chocolate was giving her an appetite for something that didn’t have anything to do with food and everything to do with passion. She closed her eyes and took another bite of the strawberry.

Annabelle closed her eyes and moaned as the decadent flavors filled her mouth. She felt the juices begin to leak from the fruit so she slowly licked them up, savoring their taste on her tongue.

“How much do you want to be that strawberry right now, Mase?” A male voice from somewhere beside her interrupted her reverie.

“More than I want coffee, that’s for damn sure.” Another male interjected and Annabelle opened her eyes, knowing exactly who those deep voices belonged to.

Cal and Mason. Could she never escape those two? Everywhere she went, there they were. At the deli where she ate lunch, at the bookstore, at the market. It was happening way too often for it to be a coincidence.

Her chocolate-covered wonderland had engrossed her so fully that she hadn’t heard the shop door open. She had to admit, at least to herself, that she was pretty much mortified to be caught by them while practically making out with a strawberry.

Despite the dark blush she knew was staining her cheeks and the way her nipples had gotten rock hard at the sounds of their voices, she turned to face the two hunks of bedrooms past.

Unfortunately for her libido, they looked as gorgeous as ever, or even more gorgeous. Cal was wearing a perfectly tailored pinstripe suit with a crisp white shirt and a red power tie while Mason was a lot more casually dressed. Not that his dark jeans and striped cotton button-up shirt made him look any less lickable.

Their hair was a little bit windblown, which meant that they’d probably walked the two and a half blocks to the shop. A new burst of desire settled low in her belly as she stared at them and began to picture licking and sucking other things that could be covered in chocolate. Long, hard, delicious things.

“I would say penny for your thoughts, but since I can pretty much guarantee they’re dirty I’d be willing to pay a whole lot more,” Cal said, and when she glanced up guiltily she could see the hunger written across his face.

Mason shifted closer and pulled out a chair to sit close to her right side, invading her personal bubble. Cal took that as his cue to do the same thing on her left.

“Better watch out, Belle. You’re about to drip,” Mason said seductively in his deep, Scottish baritone before bending his head to lick some strawberry juice from her hand.

Something was dripping all right, and it wasn’t the strawberry in her hand. She had a veritable leaking faucet between her legs thanks to these two sexy beasts.

She glanced to Cal when she felt his hand on her knee and saw a rakish smile on his lips. It caused that adorable dimple to crease his cheek. “I want a taste, too, Belle.”

Snap out of it, stupid! They are not for you. Not for you.

Maybe if she repeated it to herself enough it she could convince herself. Cloaking herself in a false sense of bravado and drawing on every Bette Davis–esque ounce of gumption she had, she snapped her spine straight and wiped the dreamy look of her face.

“Go right ahead,” she said, looking Cal in the eyes while waving toward the counter. “There are plenty over there to choose from.”

Mason’s hand came up and he caressed her lower lip with the tip of his finger. It created a tingle that didn’t just affect her lip. She had to restrain herself from nipping that digit with her teeth and sucking it into her mouth.

“He’s not talking about the berries, love.”

There was no doubt in her mind that they both wanted her. They wanted to ravish her again and Mason’s simple touch had electrified her. The temptation was like a pressing weight on her abdomen. She could feel the sexual tension simmering between the three of them and she wanted to give in, so much that her lips parted and she leaned toward Mason just slightly. Damn, his lips look good.

“How long are you going to keep running, Belle? You can’t keep denying the attraction between us. We all know that you are the perfect fit for us. When are you going to let us prove it to you?” Annabelle shivered at the feeling of Cal’s warm breath as he whispered his seductive words into her ear.

His soft words coupled with Mason’s teasing caresses lulled her, mesmerized her, and the urge to say now was an overpowering temptation. She could just picture being in their arms again. Being taken by the two of them had been the most hedonistic delight she had ever partaken of. She had come so hard and so much that her whole body had been deliciously sore for a week afterward.

The thunder blasted outside moments before rain began to soak the ground and splatter against the windows of the small coffee shop.

Annabelle quickly scooted her chair back and stood up out of their reach. She desperately tried to shake off the spell of desire that they had been waving around her.

“Nice try, fellas. Look, I don’t know why you’re trying so hard. We all know that I’m not the right girl for you. I don’t do flings and you don’t want me for the long term. We all just need to face things like adults and walk away. In fact, I know someone who would be perfect for you. I’ll text you her contact info, okay?”

Did she even breathe through that? She quickly gathered up her coat and purse and dashed out of the shop into the rain without looking back.

She got halfway down the block before she realized that she hadn’t gotten her coffee.

Puddles and no coffee. Damn them.

Cal has fancy tech, she thought briefly and then she realized what the song was. They had chosen the universal striptease song, “You Can Leave Your Hat On” by Joe Cocker.

Both men looked at her expectantly and she blushed harder. So they wanted a show. She’d give them a show.

Okay, buckle down, Annabelle. You can do this. Just dance the same way you did downstairs only add a little oomph to it and at some point drop your dress. She tried to give herself a mental pep talk.

She began to rotate her hips in small circles to the beat of the music and slowly raised her hands above her head to flip her hair to one side. She knew they had a fascination with her hair so she planned to use it to her best advantage.

Gradually she widened the circles her hips made and interspersed them with full-body rolls. She sauntered over to Mason, hiked her dress up, and straddled his lap.

She made sure that the rolling motion of her crotch came in direct contact with the hard cock she could feel pulsing under his jeans. She also made sure that he had a prime view of her cleavage as her breasts rubbed up and down over his chest with the movement of her body.

Just as he reached for her she left his lap and teasingly tsked as she went back to sensuously rolling her body in time to the music. Trailing her hands through her hair, she made her way to Callum and sat down on his lap reverse-cowgirl style and used her hands on his knees as leverage to rub her ass against him.

Again she moved back when he made a grab for her. At his growl, she laughed and shook her head.

Moving back to the center of the room, she gave the dance all she was worth. As the music started winding down she unhooked the halter straps, letting them fall forward as the dress sagged against her breasts.

Reaching behind her back she unzipped the dress, letting it fall to the ground before kicking it away.

Putting her hands on her waist and cocking her hip she struck a pose. The way their eyes were eating her up made her feel like Wonder Woman. She didn’t give a single thought to fat hips or thighs that touched.

The way they looked at her made her feel like the most desirable woman in the world. There is a way a man can look at a woman. It is a look that says everything he’s ever wanted is standing right in front of him and he gets to have her any way he wants her.

Cal crooked his finger at her and she walked back over to the couch and put as much sway into her hips as she could.

When she got to the couch both men stood to surround her with their oversized bodies. She could feel the heat of them against her skin and it made her shiver.

“Mmm, I do love that wiggle,” Cal said as he leaned down to nip his teeth down the column of her neck. “Here or upstairs?”

“Both,” Mason growled as he knelt down in front of her.

Taking her breasts in his hands, he rubbed and squeezed until she thought she’d go crazy. She wanted to beg for more of a touch but she knew that if she did it would only make him less likely to give it to her.

Of the two men, Mason had the most patience. The more she begged, the more controlled he became.

Just when she thought she couldn’t hold back anymore he brought his mouth to her nipple and Cal’s hand glided across her stomach and down her hip to lightly pet her lips.

The feel of Mason’s licking tongue and the slow sucking of his mouth combined with Cal’s light touch ratcheted up the heat even higher. She could feel the liquid spilling from her and coating her lips and Cal’s fingertips.

“I love how wet you get for us, Belle.” Cal’s breath caressed her ear as he spoke slowly and softly to her.

She’d said it before and she’d say it again, if there was anyone who could talk a woman to orgasm, it would be Callum McCray.

“It’s going to be so good when I get my dick in here.” Cal punctuated the statement by putting two fingers into her channel and gave her long strokes in and out. He made sure to run the pads of his fingers along the wall of her pussy as he pushed his fingers in and dragged them out of her.

“That’s not all, Belle,” Mason said from in front of her as he slid his hand up the back of her leg. “While Cal is feeding his cock to your needy pussy, I’m going to be here.”

Mason used her wetness to lubricate his touch against her backdoor and she threw her head back at the pleasure that his touch caused.

“Just think, baby, one of us in your pussy and one of us in your ass. Both of us sliding inside of you. We’ll push you higher and higher until you think you can’t take any more and then we’ll finally let you”—Cal moved his fingers to her clit—“explode.”