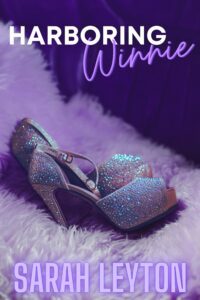 Jack, Sebastian, and nearly all of Sebastian’s TA team were already situated in the War Room when Winnie entered. She was surprised but figured the job must be a full-on security gig since that would be the only reason to get an entire team together with the resident hacker to evaluate a potential client.

Rico, a smooth-talking Puerto Rican with caramel-colored skin and soulful brown eyes, waved her over to the empty seat beside him. His real name was Angel Davila, and his first name was pronounced the Spanish way as An-hel, but no one called him by his given name. Everyone referred to him by his call sign, Rico. She guessed it was a guy thing to not be able to call another man Angel.

“Saved you a seat, chica. You always have the best insults, so you can sit by me.”

Winnie laughed as she set her stuff on the table as she sat down.

“What can I say? I think you bring it out in me.” She chatted with Rico and a few of the other members of Sebastian’s team while they waited for the last few stragglers to arrive.

Feeling a prickling sensation skitter across her shoulders, she turned her head to find Sebastian scowling ferociously at Rico and the other men around her while they studiously ignored him. Winnie, however, could feel the phantom sizzle of his gaze.

She had to block the memories that threatened to overwhelm her as his gaze blazed over her skin. Even after months apart she still struggled with her desire to submit to Sebastian. She’d spent so long in his arms, bed, and life that moving on was a daily struggle, but she’d patted herself on the back in congratulations at how valiantly she’d held her ground during all the times he’d begged, demanded, cajoled, seduced, ordered, and reasoned with her to get back together.

The day they’d broken up was the day Sebastian had admitted flatly that he didn’t love her and never would. At the time it had flipped her world inside out. The devastation had flooded her, overwhelmed her, and she’d ended their relationship on the spot.

Despite her unstable teen years she still believed in love and happily ever after. Her parents had been happy together, and her grandparents had been hopelessly in love with each other for sixty-three years when her grandfather had passed. Even afterward her grandmother had loved her husband without wavering until she’d gone to join him three years later.

Winnie wanted that kind of love in her life. Even though she wasn’t anyone’s definition of traditional and her desire to submit wasn’t what the average Jane Housewife wanted she still craved love that would last a lifetime. She wanted a partner who would adore her unconditionally. A man to grown old with, a man to raise a couple of untraditional kiddos with.

She could just picture a little boy with a Mohawk and teeny tiny Chuck Taylor tennis shoes, or a little girl in skinny jeans and a cheetah-print onesie with a big bow on her head. So cute.

While they’d been together she’d thought she’d have that with Sebastian until he’d crushed her dreams with his fear of love and his decision to never marry. Two things she hadn’t known before getting involved with him. Though to be fair, he’d never promised to be anything other than a good Dominant and lover. On that score she had nothing to fault him with. He’d been—

“Okay, let’s get started.” Jack’s hands clapping brought her out of her ruminations.

“We’ve got a potential new client. Meet Théo Bessette.” Jack clicked the remote in his hand and pulled up the picture of a handsome man with dark hair and a smug smile. “Bessette is the Count of something that doesn’t exist anymore. Basically, he’s your typical rich French businessman. He’s reached out to us to assess the security at the Lake Como home he’s recently purchased. He intends to make it his main residence and wants to make sure that everything there is secure before moving in. He claims there have been kidnapping threats though I haven’t been able to verify anything.”

Jack clicked the button again, and the screen switched to a picture of the blueprint of the house and a satellite image of the surrounding area.

“Winnie, I need you to do your thing and find out if Bessette is legit before we take him on. Think you can get it all together by tomorrow?”

“Ask for the moon why don’t you.” She rolled her eyes and sighed dramatically before making some notes on her paper.

“I’ll get it done,” she said finally once Jack had started to turn her favorite shade of red with impatience.

Jack huffed out a breath before turning back to the rest of the room’s occupants, but Sebastian kept staring at her. So she did the only thing she could think of and winked at him as saucily as possible while Rico chuckled beside her.

She smirked at Sebastian’s confused scowl as she gathered up her notebook and pen. There was no need for her to stay while the men discussed ways to get through the door of the house. That was all them with their military door-kicking mojo.

She felt Sebastian’s gaze on her as she left the room, so she put a little extra sway into her walk.

That’s right, baby. This is what you let walk away. Eat your heart out.

Unable to help herself Winnie looked up from her position on the bed to meet Sebastian’s eyes. When she’d made her decision last night to once again submit to him she hadn’t thought she would be as overcome with nervousness as she now found herself. It was like that first night they’d had together. She’d wanted to project an aura of cool assurance, but inside she’d been wracked with nerves. It was the same tonight.

“All I’ve been able to think about these last months has been you, Winnie.” Sebastian spoke as he moved toward the bed, and she couldn’t take her eyes off him. “Your smell, your taste, the feel of that soft skin at the small of your back, the way you flip your hair over your shoulder when you laugh, the way your palms feel rubbing across the skin of my thighs just before you take me in your mouth. Even the crazy stuff like the way you snap your fingers in that fast, nervous way, and how you swirl your hair up and shove a pen in it to get it out of the way when you’re concentrating. Every morning I’ve woken up and wished you were in my arms.”

She watched through watery eyes as he divested himself of the few items of clothing he had on and joined her on the bed. For a man who was usually spare with words he sure did say the sweetest damn things sometimes.

When he got to the side of the bed he sat next to her hip and leaned close to brush his lips over hers. They both froze, neither moving, lips barely touching. Sebastian broke first and groaned. Pulling her to his chest he turned so she was pulled across his lap as he sat on the bedside. His rich smell and salty taste exploded through her senses. She’d yearned for him, for this, for too damn long. He’d admitted to thinking of her, but she’d thought of him too. Every day. She’d compared every man she’d met to him, and they’d all lost hands down. No one could replace him.

Taking what she offered him he devoured her, and she groaned at the blissful torture of his naked skin against hers. Her nipples, hard beads, pressed into the wall of his chest. She poured all of her desire into the kiss and arched at how good she felt as he pressed her tightly against him. She reveled in their kiss until he wound his hand into her hair and used the grip to pull her back.

The way their faces hovered mere inches from each other felt even more intimate than the kiss. She stared into his eyes, their breath mingling hotly in the slight space between their mouths.

“Hi,” she said, breaking the silence and watching as that devilish smirk crossed his face.

“You are playing with fire, baby.”

Taking her at her word he set her back onto the bed where she’d been when he’d walked into the room while he got up and walked to the dresser to open a drawer. He pulled out a small velvet bag and dumped the contents into his hand before returning to the bed.

“Scoot to kneel at the side of the bed and then cup your breasts for me. I want to see your rings.”

After a small move to the edge of the mattress she turned her body to fully face him and slowly she slid her hands up her torso and took the heavy weight of her naked breasts in her hands. They overfilled her hands, but from the look on Sebastian’s face that was a very good thing. He leaned close and ran a finger softly across the top of one mound. He unfurled the silver chain in his hand and ran it through the rings at her nipples. The chain was short enough to pull her breasts together and cause a slight burning sensation in her nipples that made her bite her lip.

Suddenly, he bent down and took her nipple into his mouth. She grasped his head and neck as white-hot sensation broke through her body and shot straight to her pussy. Teeth nipped at her and tugged at the rings, which caused shocked gasps, but the wet heat of his tongue soothed the sharp pain. Unable to keep them open she closed her eyes and gave herself over. He wasn’t touching anything but her breasts, but she was already wet and needy for him.

When she began to run her hands over his shoulders, unable to keep still, Sebastian pulled back and straightened. The tips of her breasts were dark red with the flush from the attention given by his teeth and tongue.

Looking up into his eyes, dark with passion, the remembered feelings of submission settled onto her skin. It blossomed inside of her as if it had been waiting for him, waiting for this man to take her in hand and give her back an essential piece of herself.