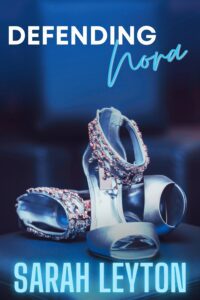 “Are you nuts? I’m not leaving. This is my home and my business. All my stuff is here. I can’t just pack up and ship off to parts unknown.” Just like a man. Not thinking things through before just issuing dictates.

Jack pinched the bridge of his nose and closed his eyes.

“It doesn’t matter, Nora. You aren’t safe here. Breaking into this house is child’s play. To be honest with you, I’m amazed that this is the first time. What if next time you wake up and Max is standing above your bed with duct tape and zip ties?”

That was not a good image and Nora winced. She most definitely did not want that, but what about her business? What about her life?

“Where would you take me?” She focused on the main question first.

“I’ll take you to my apartment. Since I live above the Winterman offices it’s locked down so tight you’ll be safe there. Now, go pack a bag and let’s hit the bricks.”

“I didn’t say I would go. I just asked where you would take me should I agree to leave with you.”

“Nora, you obviously are not grasping the gravity of the situation here. You need to listen to me and do what I say. I’ve got the experience and I know how best to handle the situation.” She could see Jack’s frustration boiling inside him, but decided to risk it anyway because now her fire was lit.

“Suck my figurative lady dick, Jack Coleman. I don’t have to do what you say. I am woman, hear me roar, girl power, Spice Girls, rah rah, and all that.” Nora was glad she’d saved her raspberry because she needed to use it now. She blew it at Jack lest he misunderstand her furious petulance.

“I know exactly what’s going on here. I’m the one that came to you, remember? I’m the one you turned down flat in your office because you weren’t worried about my problems. Well, you can’t just barge in now that you understand the gravity of the situation and start making my decisions for me. “

Overcome with frustration she poked Jack in the chest and he backed up a step.

“If I decide to come with you it will be my choice not because you say that I have to. I have a lot of options other than you.” She poked him again as hard as she could and he backed up another step. “I have Sebastian, I have Matt and Sam, and I have Belle and the girls. Matt could put me up in one of his hotels under a false name, or Belle could have Mason and Cal set me up in a suite at Sin. I even have the CIA. Evan Branders can protect me. You made your choice a week ago when you called me Glitch and kicked me out of your office.”

And that seemed to be one poke too many. In the space of a heartbeat, her hands were enclosed in his much larger ones and held behind her back, out of poking range.

“Yes, I called you, Glitch, but it was on accident. I have called and texted all week to try and apologize, but you’ve been childishly ignoring me. As for the rest of your little speech, no, I don’t own you, but I am the best choice to keep you alive and out of trouble. Can we please make up and stop fighting? I just want to keep you safe and I won’t be able to function if I’m worried about you all the time. If I’m not the one taking care of you then I am going to worry all the time.”

“Please, just let me take care of you.” Jack bent his forehead to touch hers and spoke so softly that he practically breathed the words across her lips. It had the effect of wiping away all of her anger and leaving her in a gooey puddle of emotion.

Nora drew in a deep breath to steady herself before answering.

“All right, I’ll go with you. But you can bet your sweet britches that you’re going to have to come back over here and haul out the kitchen equipment I’m going to need. I’m not toting that stuff myself. It’s heavy.”

Nora pulled back from him with a brief thought of regret at the loss of his arms around her. She turned and made her way upstairs to pack a bag with enough clothes and toiletries for a week.

If it took more than a week to catch Max then she’d have to reconsider her plans. She didn’t think her inner sex goddess could last much longer than a week in Jack’s continued presence.

“This thing between us is killing me. The only man I have ever wanted is you. I don’t want some ideal or some Jack without flaws. I want the real you.”

“You don’t know the real me, sweetheart. If you did you’d run screaming for the hills.”

“What are you talking about? Of course, I know you. You’ve been my best friend for years.”

“No, you really don’t. You know I’m an Elite member at Sin, but you have no idea what I’m into. I’m not an easy man in bed, baby. If I took you it would be my way. Period. There’s no highway option. Your body and soul would belong to me and I would fuck you and tease you and punish you until you’re left gasping, writhing, helpless to do anything but accept me.”

Jack’s speech fired her up in more than one way. She could just picture him taking her the way that he’d said and it made her hot and her libido ramped up from the steady hum it parked at whenever she was in Jack’s presence.

The other part of her fired up because here he was assuming that she had no idea what she wanted or if she could handle what he wanted. Before she could stop herself she rose up to the full height on her knees and pointed a scathing finger in his face.

“Oh please, Jack. You think I don’t know exactly what you like? You should really watch your volume with Sebastian and Matt if you don’t want other people to hear about your exploits. I’ve known for years how you take your women. You don’t think I’ve been craving it ever since I first heard you talk about it? You think I haven’t read every single thing I could get my hands on about the topic? Besides, one of my best friends owns that damn club. I know exactly why you go there and what you like. Exactly!”

By the time she was done yelling there was barely six inches separating them. She also realized that she had been poking him in the chest to emphasize her point.

Belatedly, she realized her mistake.

Before she could take her next breath, Jack had her hand captured in his and he executed some kind of expert spin move to lay her down flat on the couch.

Her body was completely covered by his larger one from thigh to chest. He also pinned her hands above her head with his much larger ones.

It felt as if every part of her was blanketed by his hard body, including the hardness currently pressed against her feminine core.

“Don’t test me, Nora. I have stayed away and that’s no easy feat. You think I don’t care? That I toy with you? You’re wrong. I want you so bad my teeth ache with it. I crave you, dream about you, but I’m doing the right thing. Staying away is the right thing.”

“Who are you trying to convince, Jack? Me or you?” Nora whispered the words softly and stared into his eyes.

Lifting her head she caught his mouth with hers. His lips felt so full and soft against hers. After a moment of resistance when she thought he would pull away Jack returned her kiss. He let his weight rest heavier on top of her and pressed her head back into the cushions with the force of his kiss.

Jack pulled his head back slightly, so his lips teased hers by brushing in light, almost teasing sweeps. Nora tried to catch his mouth with hers but Jack pulled back. She opened her eyes only to scowl at his grin.

“This is my show. You are mine and I will take you the way I want to. Tonight I want to see how high I can make you fly before you tilt and plummet over the edge. After that I plan on making you come has many times as I can before you pass out from the ecstasy. You think you know what you’re getting with me? Tonight you’re going to find out.”

Nora had to hold back her whimper. She had no doubt she’d pass out from the pleasure of it all.

Instead of moving back to her mouth as she had anticipated, Jack put his hand just under her jawbone and tilted her head up to gain access to her neck. His grip was strong, just shy of squeezing. She knew he’d never hurt her, but having his hand there, his grip putting her at his mercy totally flipped her switch.

Jack didn’t show the same restraint he had with her lips. He ravished her neck with sucking, biting kisses against her throat.

Nora was helpless against the onslaught and helpless to hold back the pleading moans he rung from her. She took what little leverage she had and rubbed the seam of her jeans against his rock hard erection.

She cried out at the feel of Jack’s teeth latching onto the pulse point at the juncture of her neck and shoulder. He bit her hard enough that she knew she would have a mark, but she couldn’t have cared less. The spot he was biting seemed to have a direct line to her clit.

When Jack brought his hands to her breast he squeezed them tightly in his palms while he grabbed her nipples with his thumbs and forefingers. The dual sensations had her whole body arching in pleasure and she cried out again.

“Please, Jack! Please!” She didn’t know what she was begging for, but she knew there was more and she wanted Jack to give it to her.